In this post you can dowload Diary 2018 Calendar, made in Excel, contains many macros that can be found and download for free from this page, it uses forms and various procedures or macros the make functional, does not use virtually any formula built in Excel.

From the end of the post you can download the example for free without any restriction, the code can be adapted to each need, please contribute to support the site if it is within your means, thank you very much.

If you are starting in the Excel operation or you need to affirm knowledge, I recommend reading an excellent book about Excel that will help you to operate the spreadsheets, click here, if you want to learn Excel, in English, then you must click here. If what you need is to learm or deepen the programming of macros with VBA, this is one of the best online courses I have seen online.

The video will see the macro in action with a more detailed explanation of its coding and operation, I recommend observing for easier understanding of the macro; subscribe to our website from the top right of the page by entering your mail and to our You Tube channel to receive in your email explanatory videos about interesting macros, such as For example, search row searching and comparing data of two columns in different sheets, search in listbox while writing in textbox, how to create an invoice or invoice and save save PDF XLS and send by mail, working with rows, cells, columns, ranges and many more examples.

When you download the Agenda 2018 Calendar, you will see on the left side the list of months from January to December, pressing on the desired month will show the same, if you need to view all you must press the button that is at the beginning called «All», this will show the calendar with all the months of the year.

By double clicking on the calendar on a particular day, a form is displayed that allows you to enter the task or activity that you wish to schedule, being able to enter the start and end time if required, also in spite of leaving by default the day in which we clicked, can be manually changed by assigning the day you want for the task you are trying to add.

By clicking on the save button at the end of the form, the task is saved and added to the list of tasks on the right of the page, automatically sorted by date, then by start time and by time of inspection of the task.

It is also possible to print the calendar, it is done from the button that is at the beginning of the file on the right, by pressing, the list of assigned tasks is printed as shown in the following image:

You can also print the calendar, the print will take a different form, printing a sheet for each month occupying the entire A4 sheet at the end of the calendar leaves some lines for writing notes, the calendar is printed in large form leaving space in the same day for annotations, just like the image that is shown below. 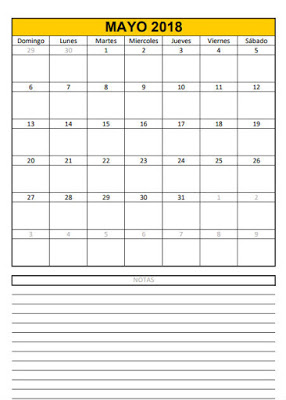